Corcovado National Park is located on the Osa Peninsula in southwestern Costa Rica. With its 424 square kilometers, it covers roughly one third of the penninsula and is one of the largest national parks in the whole country.

The park is home of one of the largest primary forests on the American Pacific coastline and is one of few places where you can visit a really large lowland tropical forest. Lowland tropical forrests tend to be very attractive for logging, since the timber can be so easily shipped out. This was especially true befor the construction of roads and highways connceting forested highlands with the lowland ports.

Being a large area of primary forest, Corcovado serves as a home for elusive species such as jaguar, ocelot, puma and jagarundi. It is one of the last remaining strongholds for jaguars in Central America. The park is also home to one of Costa Rica’s largest populations of scarlet macaws.

Along the coast, you can see pelicans fishing in the sea, and white-nosed coati come to dig up moon crabs on the sandy beaches. These beaches are also an important nesting ground for several species of sea turtle.

Short facts about the park

There is a daily admission fee to enter the park if you don’t have Costa Rican residency.

As of February 2014, all park visitors must be accompanied by certified professional guides.

Basic meals can be made available within the park if you book them at least a week in advance.

During the wettest part of the year (July – November), it is not unusual for parts of the park to be closed to visitors.

Reservations for overnight visits can be made in Puerto Jiménez. 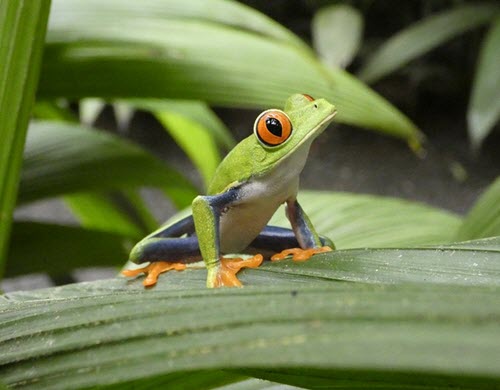 Four ranger stations with bunk beds are available. When it comes to booking the bunk beds, scientific researchers have preference over other visitors. Three of the ranger stations are located at park entrances, while the fourth is found where the inland track intersect with the coastal track.

It is also permissible to camp in the park, although not for more than four nights.

If you are okay with spending the nights outside the park, a much wider range of lodging options are available, especially in the vicinity of the northern and southern entrance to the park.

Tracks in the park

There are two main tracks:

The coastal track runs along the coast, from the northwest to the southeast (where La Leona Ecolodge is located). Estación Sirena is situated at roughly halfway between the endpoints of the track. Plan on needing at least two or three days if you want to walk through the park on this track.

On this track, you need to ford several rivers and this is not without risk. Always check up on current conditions, e.g. when it comes to tide and rains that can produce dangerously strong currents. Bull sharks and American crocodiles live in the rivers. Rio Serena is considered more dangerous to ford than Rio Claro, partly because Rio Claro has fewer crocodiles. Upstream Rio Claro is actually a popular spot for swimming.

The inland track runs from Estación Sirena to Estación Los Patos at the park’s eastern end. For much of the way, you will be hiking through secondary (not primary) forest. Hiking through normally takes two or three days, and is not as strenuous as the coastal track. There is no sand to traverse and no large rivers to ford.

In 2015, a new shorter trail was inaugurated in Dos Brazos de Rio Tigre. This is a 8 km (5 mile) hike through parts of the park and can be finished in one day.

Over a dozen different vegetation types are represented in this park, such as:

The national park is one of the last remaining strongholds for the jaguar in Costa Rica, and other wild cats are also living here, including ocelot, jaguarundi, puma, and margay.

Jaguar paw prints can sometimes be seen in the sand near Madrigal, but the jaguars themselves are rarely spotted since they are very shy of humans.

All four Costa Rican monkey species live in the park:

The park is a paradise for butterflies, with well over 200 species known to live here.

In the park, you may encounter large asymmetric orb webs spun by the golden orb spiders of the genus Nephila. These webs, which are created from yellow spider silk, can be up to 150 cm in diameter.

Examples of birds living in the park:

The American harpy eagle is the largest and most powerful of the rainforest raptors, and it is also one of the world’s largest eagles. It’s typical habitat is lowland rainforest where it inhabits the upper canopy layer. Due to habitat destruction, it has become very rare in Costa Rica and other parts of Central America. It is more common in northern South America, especially in Brazil. 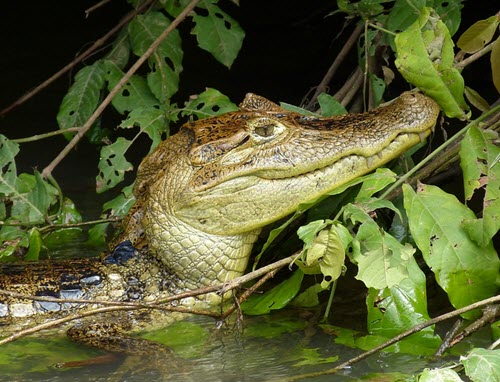 Corcovado National Park is home to many species of frog, including poison dart frogs, glass frogs and the Red-eyed treefrog. The glass frogs have transparent skin, giving them somewhat of an otherworldly appearance.

Several species of snake live in the park. Stay far away from the Fer-de-lance (Bothrops asper), a highly venomous pit viper that is the main cause of serious snakebite incidents within its range.

American crocodiles and Spectacled caimans live in rivers and lagoons in the park, and so do the Bullsharks, highly adaptable sharks that can move in and out between the salty ocean and the freshwater rivers. One especially good spot to watch spectacled caimans is Laguna Corvocado.

The beaches in the park is home to hermit crabs and moon crabs, and the White-nosed coati (who belongs to the same genus as the racoons) comes out here to feast on crabs. No less than four species of sea turtle deposit their eggs on these beaches: Hawksbills, Leatherbacks, Green turtles and Pacific Ridley turtles.

The ocean is rich in biodiversity here, and scuba divers and snorkelers can encounter a profusion of marine life. Examples of marine mammals that have been reported from the area are Pantropical spotted dolphin, Rough-toothed dolphin, Spinner dolphin, Pseudorca dolphine, and Orca. Bryde’s whale migrate through the area, and Humpback whales spend time here during the winter.

Commercial logging started in this region in the 1960s. In the 1970s, a major international logging operation was about to start, when researchers managed to convince the Costa Rican authorities – especially President Daniel Oduber – to protect the area. President Oduber created the national park on the peninsula in 1975. For this, he was honored with the Animal Welfare Institute’s Albert Schweitzer Award.

The gold miners who were already working in the area when the national park was established in 1975 were allowed to stay there, together with their families, rather than being evicted.

Instead of gradually dwindling down however, the number of gold miners grew, and by mid-1980s there were roughly 1,000 goldminers in the park + their families. This was problematic for several reasons, including their habit of hunting animals in the park.

In 1986, it was decided that the goldminers and their families would be evicted from the national park.

Nowadays, gold mining in the park is illegal, but this hasn’t stopped a new influx of miners. At the time of writing, there is an estimated 400 illegal gold miners in the park, and they are using considerably more destructive mining methods than the miners of the 1980s.