Tortuguero National Park is located in the Limón Province on Costa Rica’s Caribbean coast. Despite, or perhaps because of, its remote location, it is one of the most visited national parks in the whole country. There is no road access from San José, so visitors arrive by airplane or boat.

The name Tortuguero is derived from the sea turtles (tortugas) who come to lay there eggs on the sandy beaches here.

Many different nature types are represented within the park, including sandy beaches, lagoons, swamps, mangrove forest, and rainforest.

The Tortuguero National Park is a key Ramsar Site as defined by the Ramsar Convention on Wetlands of International Importance.

Tortuguero National Park is adjacent to three other protected wildlife areas: the Barra del Colorado Wildlife Regufe to the north, the Cariari National Wetlands to the south, and Dr. Archie Carr Wildlife Refuge at the mouth of the Rio Tortuguero (by the town Tortuguero). The Dr. Archie Carr Wildlife Refuge is home to a biological station that carry out a turtle tagging program under the auspices of the Sea Turtle Conservancy (formerly The Caribbean Conservacion Corporation).

The mouth of the Rio Parismina is found at the southern extreme of the Tortuguero National Park.

Tortuguero is a very humid place, and i

Air filled with moist comes blowing in from the Caribbean Sea, and the park tend to have more than 330 cloudy days per year.

The soils are thin and the precipitation that falls drains quickly.

The park is drained by a system of streams, rivers, interlinked canals, lagoons and lakes.

Erosion has created depressions in this coastal landscape, and these depressions are filled by short-term floods. The park is also home to estuary lakes, grassland marshes, and wooded swamps.

The plains are interspersed with gently rollings hills formed by volcanic cinder cones. Two of the highest points are Tortuguero Hill and Lomas de Sierpe. There are no tall mountains in the park; even the tallest hill tops are fairly close to sea level.

The streams are home to floating aquatic plants, including members of the genera Salvinia, Eichhornia, Azolla, and Hydrocotyle. During the dry season, some streams are almost completely covered in floating plants. 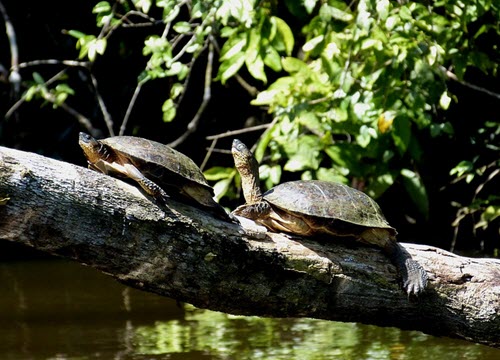 Examples of aquatic animals that can be encountered here, either in the ocean or in the lakes and waterways, are American crocodiles, Spectacled caimans, Bull sharks, tropical gars, and manatees (a mammal also known as sea cow).

Sea Turtles come to the Tortuguero National Park to lay their eggs in the sand on the beach and along some canal banks. Hawksbill turtles, Loggerheads and Leatherbacks lay eggs here from February to July.

Examples of terrestrial mammals living in the park:

375 species of bird has been recorded in the park, including toucans, kingfishers, several parrot species, and the Crested eagle. Each year, nearly a million migratory birds stop here during their journeys.