Unlike the other islands in the eastern Pacific region, Cocos Island is overgrown with dense tropical moist forest, and at higher elevations you can find cloud forest. 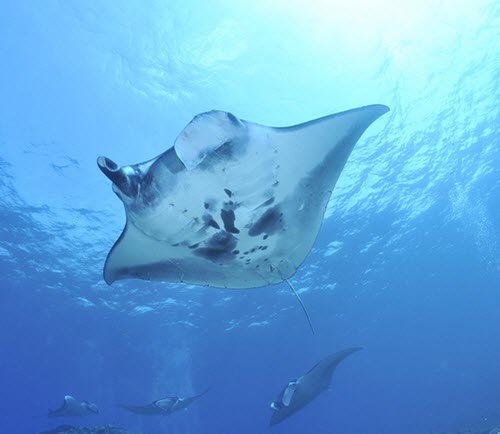 The lifeforms that inhabit this island have arrived through long distance dispersal, since the island has never been attached to a continent during any part of its long history. Over time, some mainland species that have made it to the island have developed into new species on this isolated island, giving rise to species that are only found on Cocos Island and nowhere else in the world. There is for instance at least 70 flowering plants that are endemic to the island, and 16% of the insect species found here are endemic.

Human presence has had an impact on the island vegetation, and some of these changes might have been pre-Columbian. When Captain Wafer (of European ancestry) visited the island in 1685 it had extensive coconut groves that extended from the coast to the island’s interior. According to Thor Heyerdahl, these groves were most likely the result of humans actively promoting coconut growth by clearing ravine bottoms, plateaus and ridges and planting coconuts there in the pre-Columbian era. Coconuts provide both food and a drinkable liquid, and comes in a handy storable “packaging”, making them highly valuable for seafarers. Today, these extensive coconut groves are no longer there, as other trees have out-competed them, but the island is still called Cocos Island.

All the land mammals on Cocos Island hail from ancestors that were brought here by humans in the post-Columbian era and are considered harmful invasive species that the Costa Rican government has vowed to control. Rats arrived as stowaways on boats, while pigs, goats, and deer were deliberately introduced in the past to provide food. There are also cats on the island; probably the result of both deliberate introduction and ships cats leaving boats on their own accord.

So, far researchers have found the following on the island:

More research would likely reveal an even greater number of species, including many endemic ones.

Going to Cocos island is very expensive. The reason that it is expensive is that it is a long trip and there are only a low number of boats going there.  You do not need to be a rich day trader, stock broker or entrepreneur to go to the Island but you must be able to spend more than USD 5000 for a week long vacation.  Expect to spend USD7000 or more before you are back home again.

Cocos Island is covered in coastal forests from the island rim and up to an elevation of circa 50 meters. The three dominating trees in these forests are Coconut palm (Cocos nucifera), Monkey apple (Annona glabra) and Bucayo (Erythrina fusca).

Cocos Island’s inland forests start where the coastal forest landscape ends, at roughly 50 meters of elevation, and continues up to approximately 500 meters of elevation. In the inland, it is common for the trees to have a lot of epiphyts growing on them, including orchids and bromeliads. Ferns and mosses are also very fond of this environment.

Of the tall trees, the three most common ones in the inland forest are Ocotea insularis, Sacoglottis holdridgei and Cecropia pittieri. C. pittieri is endemic to Cocos Island.

The understory consists chiefly of tree ferns, sedges and some lower palms.

The Cocos Island cloud forests are only found at elevations exceeding 500 meters. Flowering plant species belonging to the genus Melastoma dominate here. Melastoma is a genus associated with Asia and Australia, not the Americas, but it has managed to reach several Pacific Islands.

Over 85 species of bird have been encountered here, but only seven species of land bird are known to actually live permanently on the island. Three of them are endemic to Cocos Island: Cocos cuckoo (Coccyzus ferrugineus), Cocos flycatcher (Nesotriccus ridgwayi) and Cocos finch (Pinaroloxias inornata). The Cocos finch is the most abundant landbird on the island and can be found in all the different habitats. It’s an adaptable bird that eats a wide range of insects and plant food. It is also the only one of the Darwin’s finches who doesn’t live on the Galápagos Islands.

Both Cocos Island itself and neighboring rocks are used as nesting grounds for migratory birds, some of which form large nesting colonies. Examples of seabirds that nest here are the Red-footed booby (Sula sula), the Brown booby (Sula leucogaster) and the Great frigatebird of the subspecies Fregata minor ridgwayi.

Only two species of lizard have been reported from the island: the anole Anolis townsendii and the gecko Sphaerodactylus pacificus.

No amphibians have been found on Cocos Island.

Cats, rat, pigs, goats, and deer live on the island. All of them have been brought here by humans and are considered a problem for the native ecosystem.

Over 400 different insect species have been identified here, including 65 species that are found nowhere else in the world. The largest diversity are found among the butterflies, moths and ants.

Cocos Island is home to spiders, centipedes, millipedes, and isopods.

Cocos Island is famous for its rich marine fauna, especially among scuba divers. The area surrounding the island is rife with reef building corals, caves, volcanic tunnels, and massifs.

Several types of shark frequent these waters, including Whale shark (Rhincodon typus), Whitetip reef shark (Triaenodon obesus), and Scalloped hammerhead shark (Sphyrna lewini). In the early 2010s, reef sharks (Galeocerdo cuvier) begun to appear in these waters after not being seen here for three decades. Some of the predatory fishes that come here are attracted by the large schools of yellow fin tuna.

Regrettably, the illegal catching of large marine species is a problem around the island. This includes large-scale illegal killing of sharks to obtain shark fins for shark fin soup consumed in Asia.